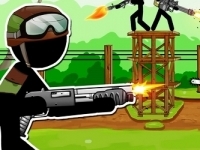 A crowd of renegade stickman have started to invade the jungle and kill people. The last hope of the region is its best army team !!! You are a team of 2 super well trained soldiers. You are in command of a number powerfull weapons that can stop the revolutionaries. You can end this war... But this Play Stickman Army : The Resistance online at friv22.com. You can play it in fullscreen to have fun with it. Stickman Army : The Resistance is a great Friv 22 game to play with no cost.

Use Left Mouse button to Play,